Where Theory and Science Meet the Real World

The theme for this symposium is Interaction between Convection and Large-Scale Disturbances and will celebrate and honor Professor David J. Raymond for his 43-year career as a researcher and educator. Evidence of Dave’s scientific creativity can be found in any of his papers that have become classics. His contributions include theoretical formulations of the Madden-Julian oscillation; a stochastic mixing model for cumulus clouds; pioneering in weak temperature gradient (WTG) simulations; case-studies of easterly waves; thermodynamic control of tropical rainfall; theory on spin-up of tropical cyclones; rational approaches to cumulus parameterizations; regulation of moist convection, wave CISK theory, boundary layer quasi-equilibrium theory and so much more.

The common denominator in Dave’s research is understanding the interaction between convection and large-scale disturbances. We will have 18 invited speakers, all of whom have contributed to this field of study and worked with Dave over the past couple of decades. 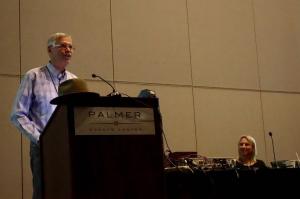